The Otari MX5050 tape decks are a commercial grade RTR machine that was marketed towards recording studios, TV, and radio stations. Generally speaking, they were not designed for the home audio market, although many of these decks are found in audiophile systems due to their stellar performance and high reliability.

The decks offered several versions, including ‘portable’ upright decks, or ‘console’ models with the meter bridge above the transport, which sits flat. This model also featured 2, 4 or 8 channel models, with the 8 channel being a ½” tape version. 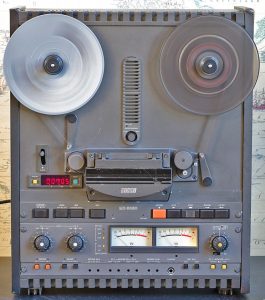 el models have a control under the head cover to switch to a ¼ track playback head, so that you can  play back  ¼ track tapes as well as play and record in ½ track mode. The decks came with  7 ½ and 15 IPS speeds, however there is an option on the power supply board that allows you to use the deck in 3 ¾ and 7 ½ IPS mode. Recalibration of the deck is required however, as the record and playback eq curves will be incorrect otherwise.

The MX5050 has three direct drive motors, which simplifies the transport significantly. The only belt in the Mk1 version is for the mechanical tape counter. Versions II and III used digital tape counters, so no belt is required.

The MX5050 uses balanced XLR input and output connectors, with pin 3 being designated as ‘hot’. This option can result in no audio on occasion, while most other equipment assigns pin 2 as hot. If you run balanced to balanced cables, then you should have no issues, but if using balanced XLR to unbalanced RCA cables, on occasion these will need to be rewired at the XLR end so that pin 3 goes to the center RCA connector pin.

Strangely, I recently found out that while the MX5050 4 track/channel version has XLR inputs and outputs, the input is actually unbalanced, with pins 1 and 2 being shorted together on the motherboard. In that case it’s mandatory that you use cables that are wired as pin 3 being hot.

Overall the MX5050 series, and all Otari decks are very reliable, as they were designed to be powered on 24/7 in radio and TV stations worldwide. Most failures that I see are age, or lack-of-use related, with dirty switches and controls being common throughout the Otari 5050 (and any other RTR deck), which can be cured with control cleaner. The sound quality is excellent overall. The decks do have a bit more of an ‘industrial’ look, with no shiny chrome to be found anywhere.

What is very handy on the MX5050, is that the bias and eq adjustments, along with the recording level to the tape can be adjusted on the front panel with a small screwdriver.  This allows  you to set these adjustments to the specific tape brand you are using. Back in the day, when radio and TV stations would use several different types of tape, this ended up being super handy. Of course, if you don’t have the proper tools and test equipment, you can certainly make a mess by mis-adjusting these trimpots. Generally speaking, these trimpot settings do not drift, so unless the deck requires a complete re-calibration, you are best off leaving these settings alone.

As stated, the ‘pin 3 hot’ configuration can confuse some people as to why they have no output from the tape deck.

The direct drive motor has a sensor within the motor assembly that can jam up the motor if the glue holding it in place dries up, which I’ve seen a few times. Fortunately, the motor assembly does come out, and with some epoxy and gentle handling of the sensor, it can be glued back in place. I have also seen the motor bearings seize up due to non-use, and have had to scrap the odd motor when the bearings wouldn’t unseize.

Dried up grease can also plague this model. I’ve had the tape tension lever/shutoff switch seize up to the point where the transport will not shut off at the end of the tape. Disassembly of the tape lever and related assemblies and new lubrication will free that up.

Sellers of Otari 5050s have sometimes found out the hard way that the screws holding the power transformer are weak, and can snap if a deck is dropped, even if it’s well packed. As you can imagine, an 8 lb transformer with some slack in the wiring harness can bounce around within the deck, shattering PC boards and everything else in its path. Oops! The solution is to remove the power transformer from the deck, (not hard to do if you’re technically inclined) and need to ship the deck. The alternative is to use packing material around the transformer to prevent it from moving should one or more of the mounting screws snap. Note of course that this is not a common occurrence.  If you are moving the deck across town in your car, you won’t experience this problem.

One other issue I’ve seen in these decks from time to time is that the capstan motor refuses to spin at all. You can see the motor pulse when you first turn the deck on, but it’s completely dead at either speed, and the capstan motor shaft spins freely. This is due to bad speed switch contacts, covered in the ‘tech tips’ section of this site.