There’s not a whole bunch online about when Pioneer started making reel to reel tape decks.

N0 question that they made receivers long before they got into the RTR business. That aside, their tube receivers and amplifiers are in high demand, and go for a premium if they are in great condition. The 1970s Pioneer SX series were built like tanks, and the high power models command a top dollar.

While most of the Pioneer models were sold in the mid 1970s, there are some earlier 7” machines in single direction and auto reverse models. These are the T-115, the T-6600 auto reverse model, and the QT-74, an auto reverse stereo/single direction quadrophonic deck. As with many late 1960s decks, these early Pioneer models can be finicky, with all sorts of braking and transport problems. We’ve scrapped the last two we had in here, as they couldn’t be reliable long-term. When working however, with good heads,  you can get a 20Khz frequency response at 7 ½ IPS.

The RT1020 was the next step up to the RT-1011. Similar in styling to the 1011, the RT1020 offered a 4 channel playback head for quadraphonic sound. Recording however was in stereo only.

The  RT-1050 was the Pioneer ½ track model, and high speed, with 7 ½ and 15 IPS. Despite RCA input and output jacks, the 1050 aimed at the semi-pro market, generally owned by Teac/Tascam, Otari and Fostex. Not too many units were sold, however we see one in once a year for servicing.

Strengths and weaknesses of the early RT series decks are as follows:

Pioneer made four silver (and the rare black) rack mount reel to reel models, the RT-701, a single direction 7” deck, the  RT707 auto-reverse version, and the RT901 andRT-909, the single and auto reverse version accepting up to 10” reels. Since tons of these were sold, they each get their own write up.

Both of these decks were designed to be rack mounted into the top of the line Pioneer ‘Spec’ series of racks, and while there’s little ventilation in the racks when fully loaded, they had a great look to them. Both decks will also fit any other 19” standard rack, so the ‘cool’ factor is high on both decks.

The internals between the 701/707 and 901/909 are significantly different, despite looking similar on the exterior. The 707 uses a direct drive capstan motor, which has generally been reliable. The reel motors are also direct drive.

Pioneer used standard steel heads, and many of these decks need lapping of the heads, as even a small groove in the heads due to wear will cause level fluctuations.

Pioneer’s pinch roller rubber and belts are known to fail, and the pinch rollers can seize up due to gunk building up on the roller shafts. This can cause massive speed changes or wow in recording and playback. It’s easy to disassemble the pinch roller (a single Philips screw) to clean the sleeve bearing, and reassemble. 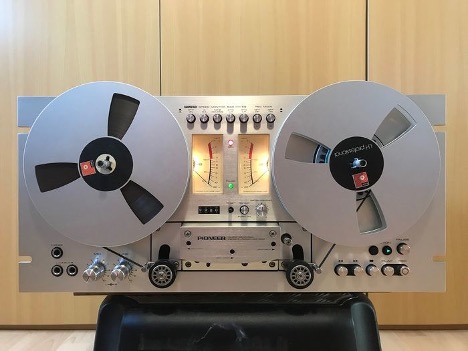 Most 10” Pioneer decks sold were the RT-909, the top of the line (at the time) Pioneer deck. All of the same allure of the good looks of the 701/707, but more-so, especially with the sexy 10” Pioneer reels (also selling for a premium on eBay!)

The Pioneer RT901 and 909 don’t share a lot of components with the 70X series, as the design and construction is completely different. The 901 and 909 uses more logic via a PC board behind the function buttons, making the deck more complex. The transport board is also more complicated, as it uses trimpots to adjust the tape tension, as compared to large power resistors in the 70X series.

The motor in the 90X series is a small 24 volt motor, the same one that Teac uses in a lot of their decks, and the 90X decks are dual capstan as compared to single capstan on the 70x series. The belt MUST be the correct thickness and diameter in order for the 90X decks to work properly! The problem is, a couple of the cross-reference books are incorrect, causing tape drooping between the capstans and tape tension issues if the wrong belt is installed. It literally took hours for us to figure this out, when we were inadvertently sold the wrong belt.

These motors have brushes that do wear out from heavy use, and as a result, the price of these  motors has tripled in the last few years on eBay.  If the capstan belt stretches, and wraps itself around the motor pulley, the motor can and will burn out within 10 seconds of the motor stalling. Beware!

The logic board and tape transport board can be difficult to troubleshoot, ditto for the fluorescent meter logic board, as it’s TTL based circuits (lots of small chips, and a fault in one chip can affect the whole display). While good used replacement boards can usually be found on eBay, the logic board is especially difficult to remove and reinstall.

Still, if serviced properly,  and the heads are in good shape, the RT90X series is a great addition to any vintage stereo.

I’ve left these two models until the end, as there’s not a lot out in the field. These decks were based on the RT-1050 models, and came in ½ track or 4 track (4 channel) models. The transport is as reliable as the other RT 10XX models, but were high speed (7 ½ and 15 IPS). They were Pioneer’s attempt at the semi pro market, and also as a ‘portable’ high end deck, as they came with deck covers that snapped onto the front of the transport and the electronics, with carrying handles.

The electronics featured front panel bias and eq adjustments, along with mic and line mixing. The deck is really nice, however finding intact front covers is rare, due to them being made out of press board, so they crack and split if roughly handled. The heads are no different than the 10XX series of decks, so they sound about the same as the rest of the Pioneer line.

The weak point of the decks are the special cables that connect the preamplifier units to the transport. These cables, if lost, are really hard to find,  as the special multi-pin connectors are no longer being made (to our knowledge). Early Sony reel to reel video recorders used the same connectors between the decks and the video monitors.