A common occurrence with reel to reel tape decks is the shifting of the reel tables that the take-up and supply reels fit onto. If a deck is handled roughly during shipping, or if a deck falls forward on its face, there’s a good chance that a reel table has shifted on the motor shaft. Note that  most reel tables on single motor tape decks cannot be adjusted, however in 3 motor decks where both reel motors are direct drive,  a simple adjustment can be done to adjust the reel table to prevent tape scraping, or a jammed tape path where either the take-up or supply reel is hitting the front face of the tape deck.

If a reel table is damaged, or bent, you can also use this procedure to replace the reel table assembly, or just the part that clamps to the motor shaft. Some Akais and Teac/Tascams suffer from bad casting of the reel table, which can crack or disintegrate over time.

We’ll take a look at the Tascam 38, a ½” 8 channel deck that came in recently with shifted reel tables. By taking off the NAB hub, you can see that someone used green painter’s tape to build up the height of the NAB hub so that the reel of tape would clear the front panel. That’s not the right way to do things, although I’m sure this got them by in an emergency. With this deck, I found that both reel tables had been pushed into the deck, you can see the scrape marks around the plastic cover of the deck, where the reel had hit it.

The Tascam 38 is similar to many other Tascam/Teac decks in the way that the reel tables mount to the motor shafts. 3 motor Akais, Sonys, Pioneers,  and Otaris are also similar, as well as other decks.

To see how the reel table is mounted to the motor shaft, take the back off the tape deck. In the case of this Tascam, the plastic back panel comes off, then 6 more screws hold on the metal U cover that makes up the top and two sides of the deck.

With the back and sides removed, you can see through the opening between the chassis and the front cover  that there are two Philips screws that hold the reel table to the motor shaft. Many Akai decks are similar, although access to the reel table screws are done through the side of the deck. Some brands of decks use Allen screws instead of Philips head screws. Make sure that you use a (usually) Metric Allen key for a proper fit to loosen the screws. 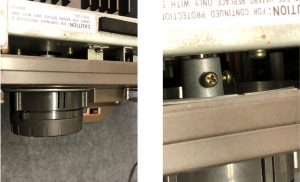 Once the reel table is roughly back to where it should be, put the NAB hub back on, and thread a tape onto the machine and to the take-up reel. 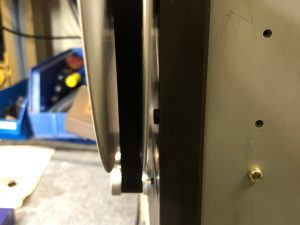 This picture shows the reel table properly adjusted, so that the tape falls exactly between the front and rear tape reel flanges, resulting in a noise free tape path and an even tape pack as you play the tape through. Check FF and REW before tightening up the reel tables fully (don’t strip the screws!) to make sure the reel table height is properly set for both supply and take-up reels. 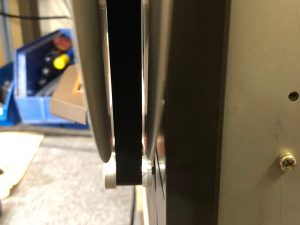