Many early home reel-to-reels were mono, but by the late 1960’s, most were stereo. 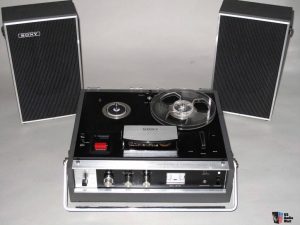 Most mono reel-to-reels had an amplifier and speaker built right into the reel-to-reel, while entry level stereo units had stereo amplifiers and two speakers built in. Many Japanese brands of decks had speakers built into the lid of the tape recorder, with six-to-ten foot cords attached to them, so that each half of the lid had one speaker in it, and they could be separated for stereo sound Toshiba, JVC and Sony were typical entry level stereo brands.

As tape technology and overall home stereo performance improved, tape recorders became tape decks, and the speakers and amplifiers were removed so that the reel-to-reel machines could be plugged into a more powerful stereo receiver or amplifier with stand-alone speakers.

Typical consumer tape decks played at speeds of 1 7/8, 3¾ and 7½ IPS (inches per second). As tape speed increases, the sound quality and frequency response improves. Generally the 1 7/8 speed was used only for speech, as the high frequency response is limited. A good reel-to-reel deck will provide good quality recordings at 3 ¾ and 7 ½ IPS, but with a good ear, most people can tell that the frequency response is better at 7½ IPS.

Between the mid-1960s and mid-1970s, almost every stereo/hi-fi company made a reel-to-reel tape deck, or had a major manufacturer OEM a tape deck chassis with their own brand name on it. Lower end deck manufacturers included Sanyo, Toshiba, JVC, Aiwa, Sony, and Concord, with better quality coming from Akai, Sony, Teac, and Revox. The Japanese didn’t have a lock on the market, though: many European decks also were imported to North America including Philips, Grundig, Telefunken, Revox and Dual. Console stereos also were equipped with built in reel-to-reel tape recorders.

A consumer deck generally is quarter track, which means the tape can be flipped over and the other side of the tape use for twice the recording time. Some older mono machines were half track, so while the tape could still be flipped over, some mono tapes could not be played on a newer stereo deck due to the way the tracks were recorded. Most decks would have a microphone as well as a line level input so that either voice or music could be recorded from a variety of sources. Some decks only allowed one source at a time to be used, others had microphone and line level mixing, so that you could talk over top of music if you so desired.

Auto reverse was a high-end feature and allows playback on both sides of the tape without having to get up and turn it over. The magic was done via a strip of aluminum that touched a pair of contacts at the end of the tape, which told the deck to reverse the direction of the motors, and either a second playback head was used to play the reverse side of the tape, or some decks would physically turn the one head so that the tape was aligned with the tracks recorded in the opposite direction. Some machines used a tone recorded onto the tape itself to sense when to reverse the tape direction.