While many say that the Akai GX-747 flagship deck was too complicated, and that users should look for the lesser GX-635, 636 or 646 (and they’d be partially right!), a properly working GX-747 is an excellent performer, and will last many years.

Once the belts stretch even a little bit, or the tension lever assemblies stiffen up due to hardening white lithium grease, the tension lever arms will never trigger the micro-switches that are at the ‘load’ position, and the arms will continue to move back and forth, non stop.

If the belts are stretched to the point where they don’t move the tape tension levers at all, the deck transport won’t function at all.

Fortunately the cure is simple..replace the belts, and lubricate the tension lever assemblies. 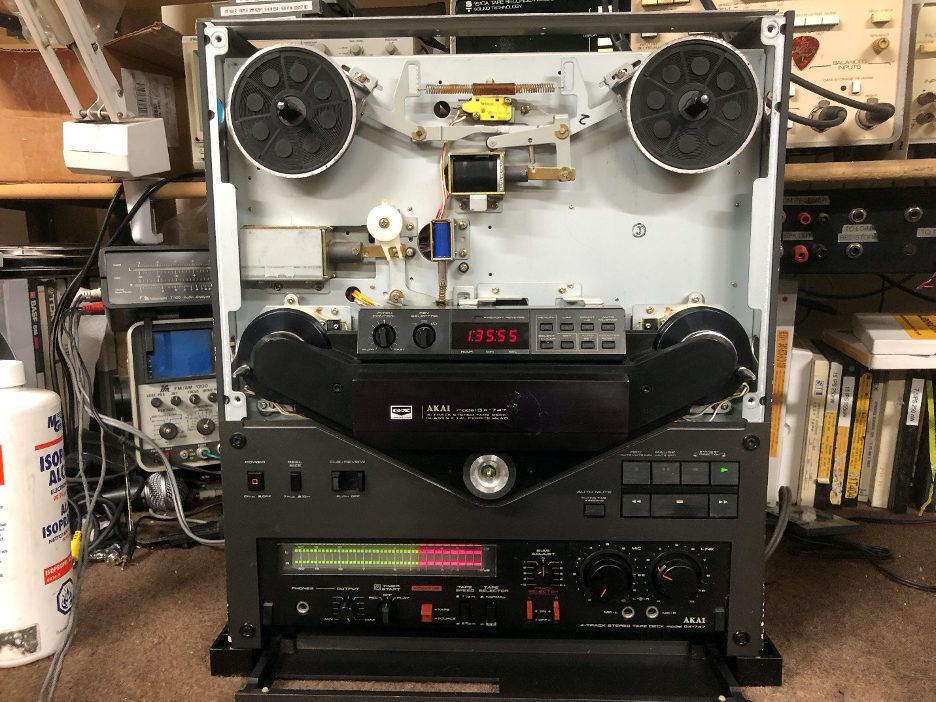 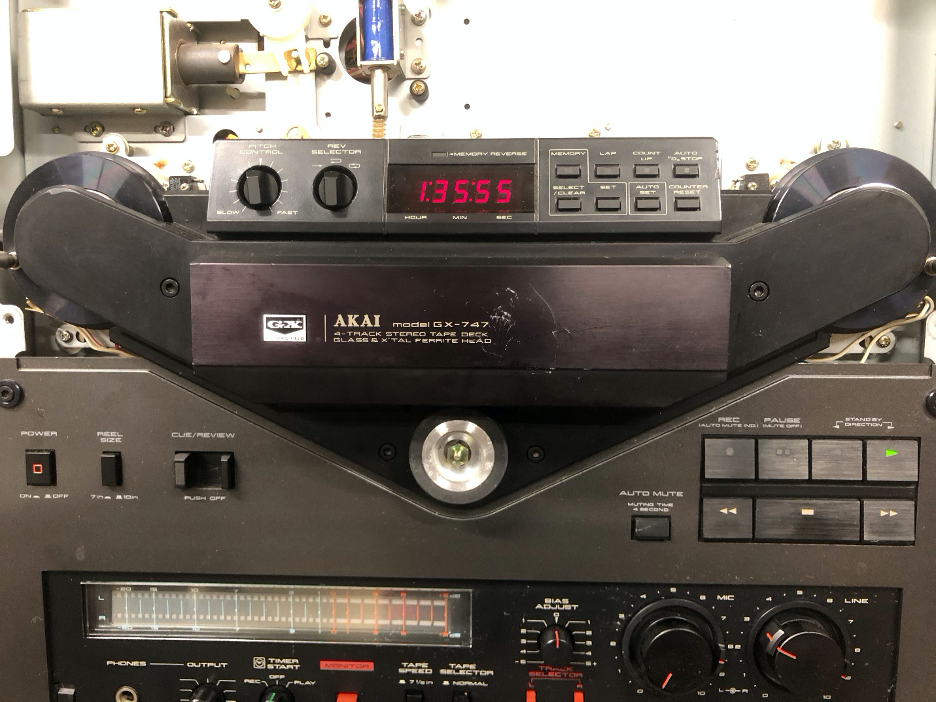 Remove the pinch roller screw on cap, and undo the 8mm nut underneath the cap. There’s likely a very thin washer under the nut/bolt assembly, as well as one under the pinch roller. Put those aside. If you put all the small parts on a white paper towel, they’ll be really easy to see once it’s time to reassemble everything. 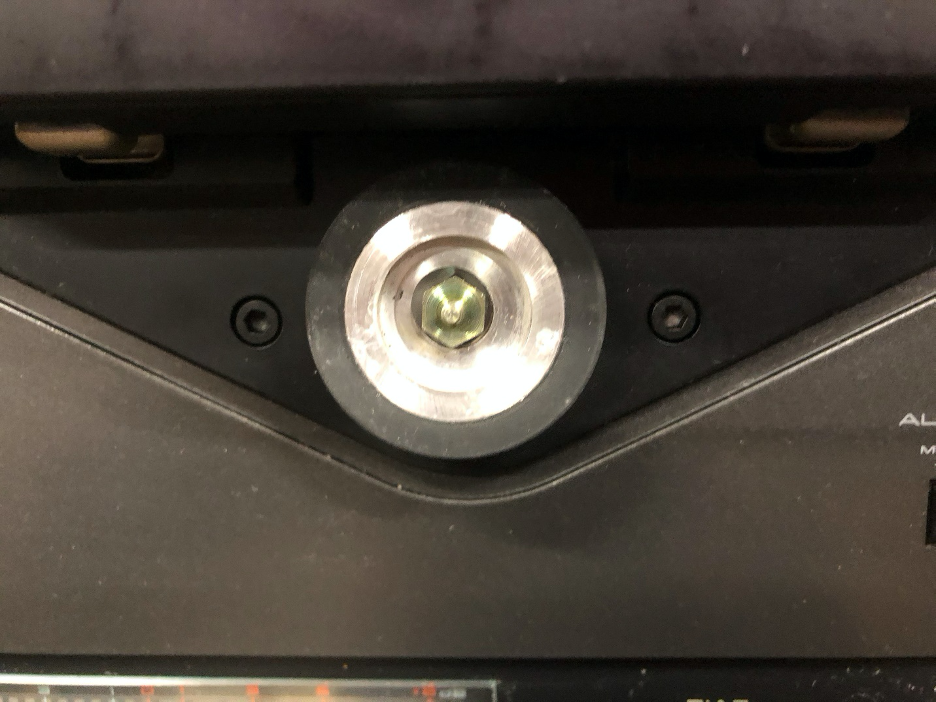 Remove the escutcheon that holds the tape head cover by removing two Allen screws as well as the two Philips screws. Since it’s difficult to grab the two plastic knobs with the cover in place, just wiggle the cover off, and the knobs will come with the cover. Make sure the knobs don’t shoot off as they come off the control shafts! 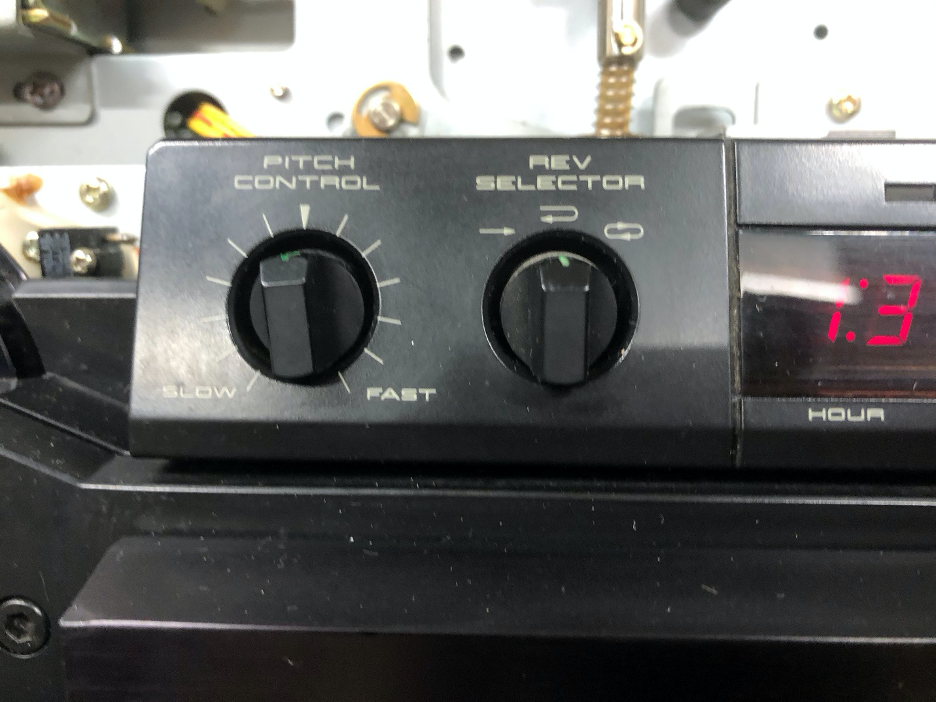 Remove the top cover, taking off the 6 Allen screws that hold it in place. Make sure you don’t lose the plastic washers under the screws, they are impossible to find aftermarket!

Take off both wood side panels, as you’ll need those to access the sides of the tape tension lever assemblies later.

Remove the back cover of the deck.

Put the deck on its back, facing up.

You now have access to the two tape tension lever assemblies. Both are identical, but are mirror images of one another. They are held in place with two Philips screws and one 6mm nut.

The take-up tension arm has a small rubber belt that goes between the optical rotating disc and the back of the tape tension arm. Remove that belt, and put it aside. That’s the 5.25” belt. Replace it, most of them are still fine however, as there’s no tension on that belt. 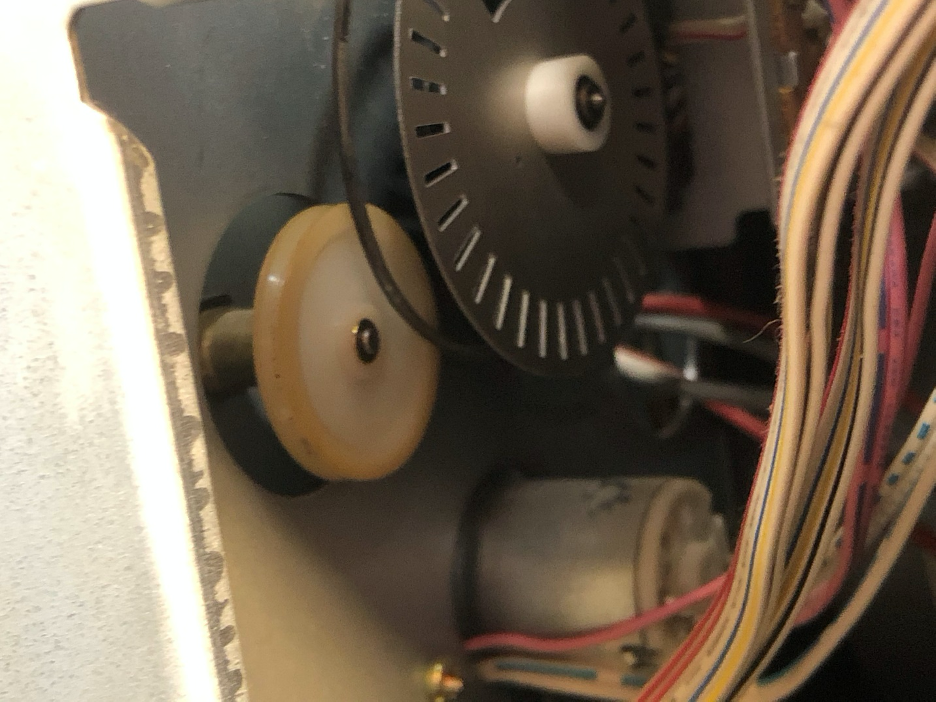 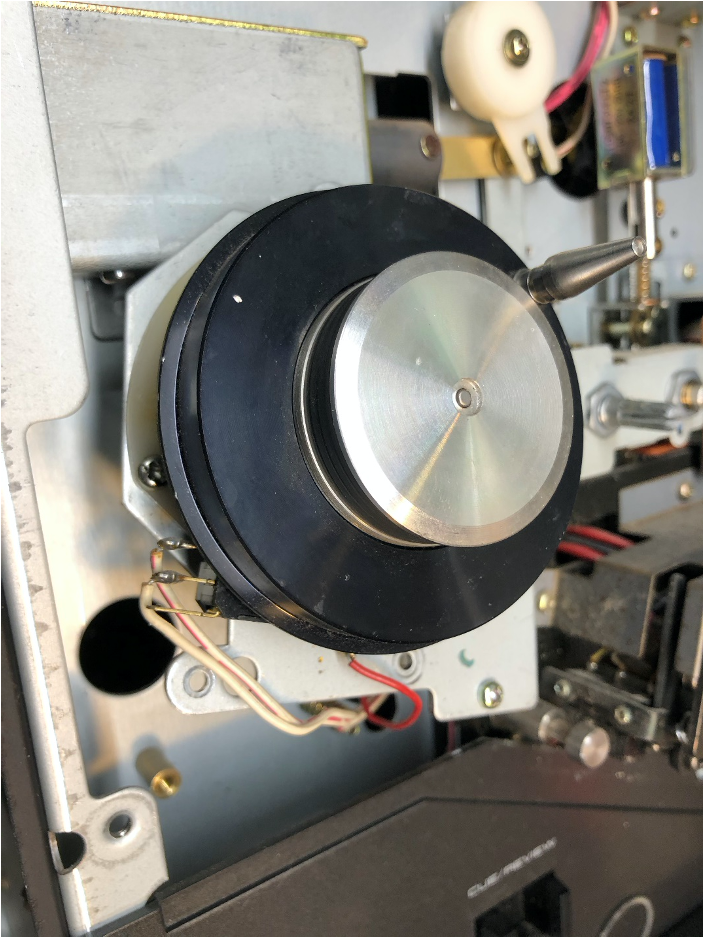 The first thing to do is clean off as much yellow grease as you can from the plastic portions of the tension lever as shown below. I generally squirt some DeOxIt onto the cotton swab tip, so that it puts some lubrication on the plastic while cleaning off the old grease. Or, use a clean cotton swab to clean off the grease, then give a tiny squirt of DeOxIt onto that plastic track to re-lubricate. 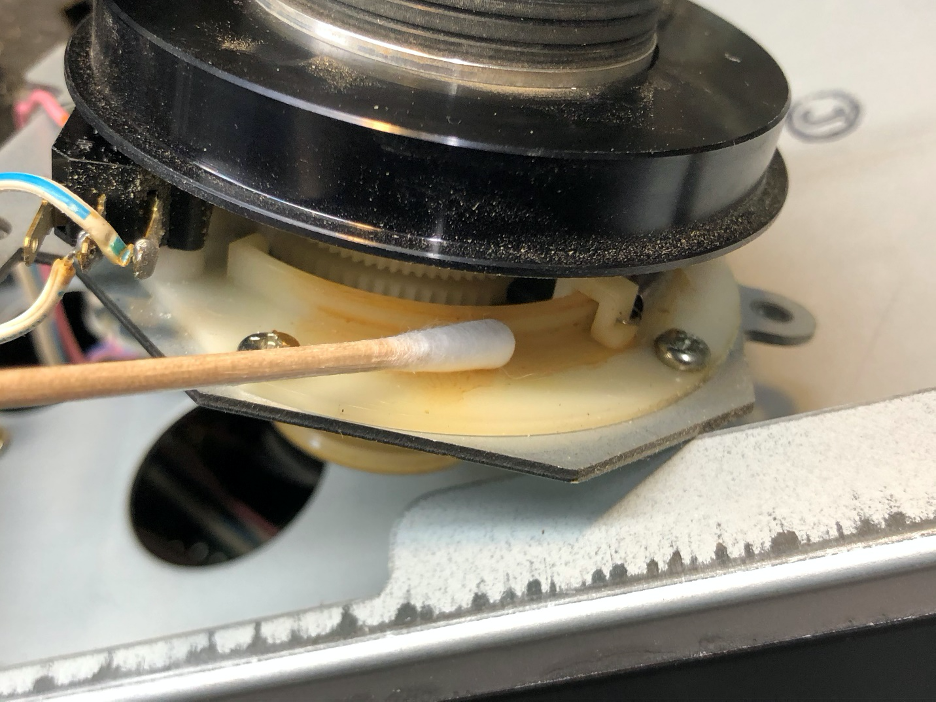 The tape tension motor assembly is held to the main tape tension frame with two Philips screws. Take out those screws to expose the gears, motor, and offending belt. Note again that the motor wires run through the chassis. Too much stress on them, and they will break, meaning you’ll need to re-solder them back on. 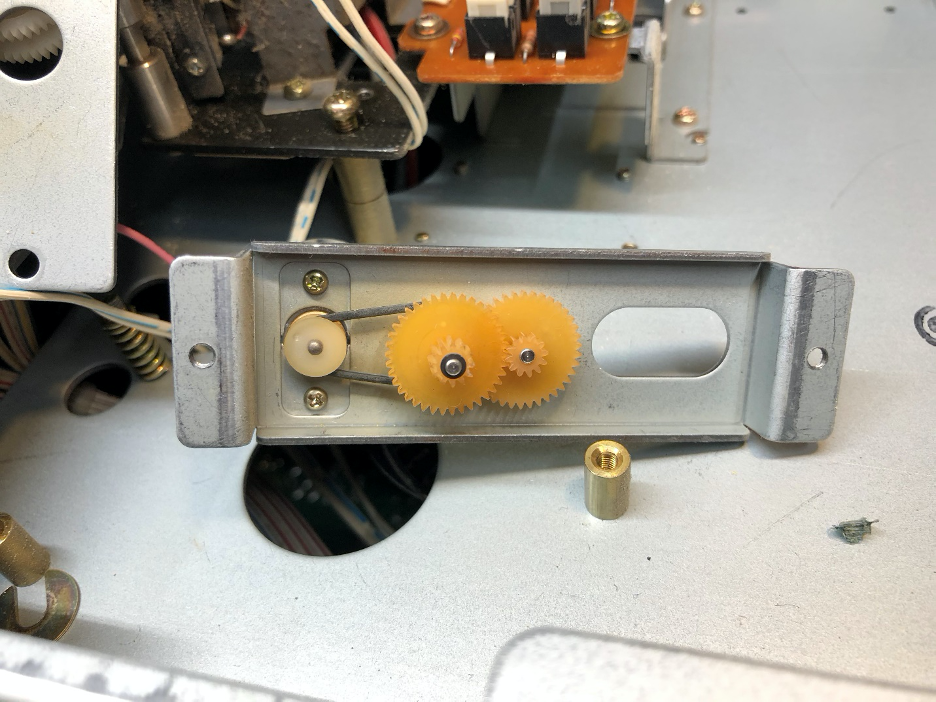 There’s a tiny washer/clip that holds the topmost gear in place. Using a small flat blade screwdriver, gently pry that washer off. Careful, it can spring off and shoot into the depths of the deck, and you’ll never see it again! 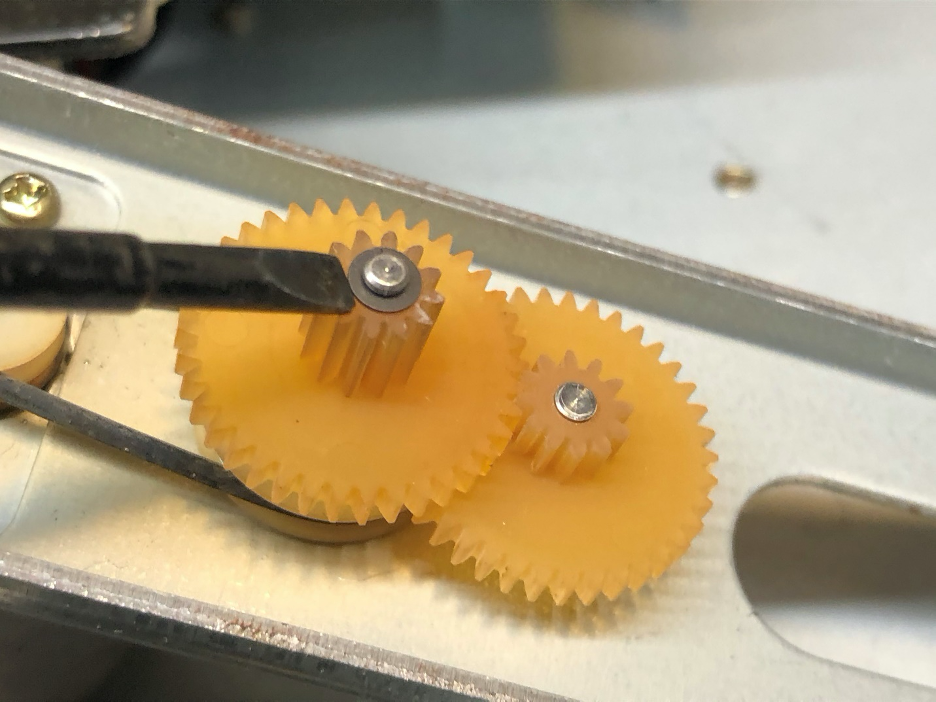 Put that washer aside. That allows you to pull the two gears out, so that you can access the belt. Replace the belt. 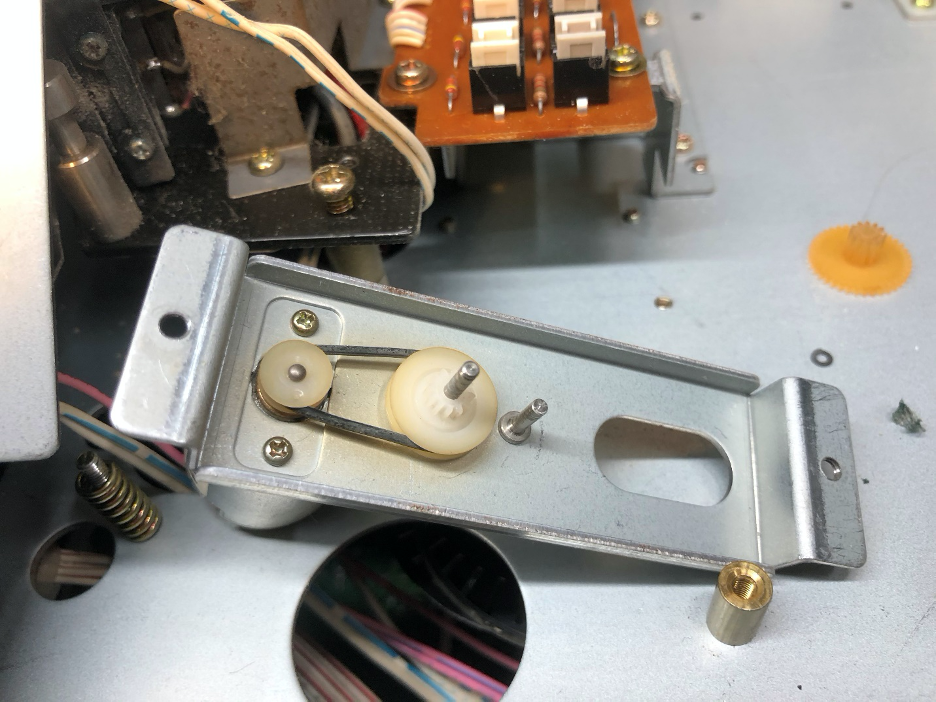 Reassemble the gears. The easiest way to put the washer back onto the top gear is to wet your finger, as the washer will stick to your spit, then press it down on top of the shaft, clicking it into place. 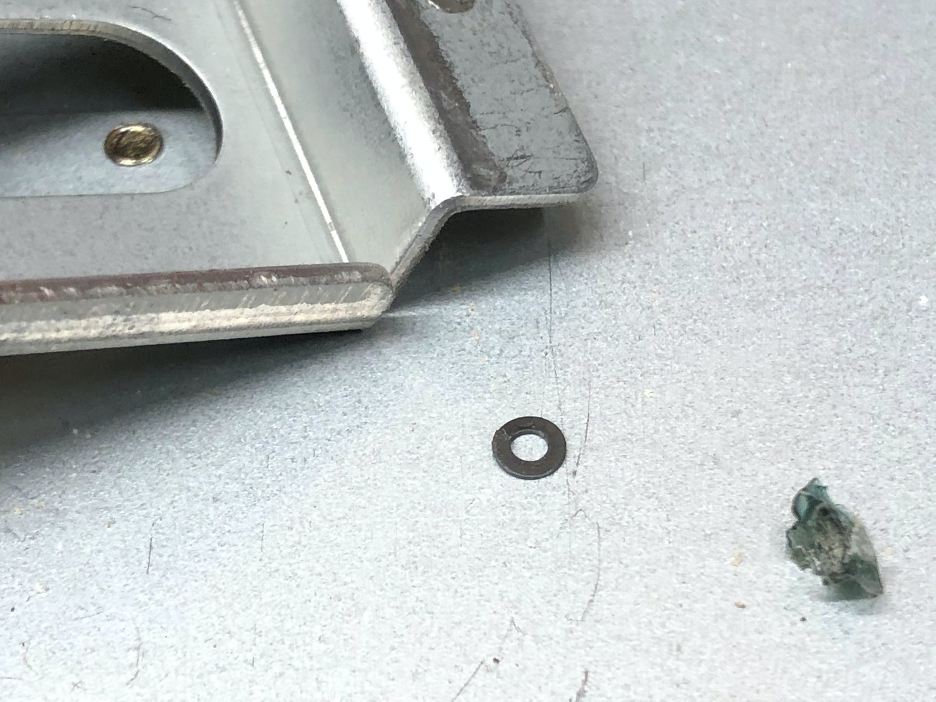 Reassemble the motor assembly back onto the tape tension lever.

Now, manually move each tape tension lever as to the 9:00 position for the supply reel, or 3:00 for the take-up reel, and let go. The tension levers are spring loaded, and should rotate around the idler wheel, in well under a second from end to end. If they move slowly, or if they are stuck completely, that means the white grease has partially seized up the mechanism, and will put excess stress on the new belts. 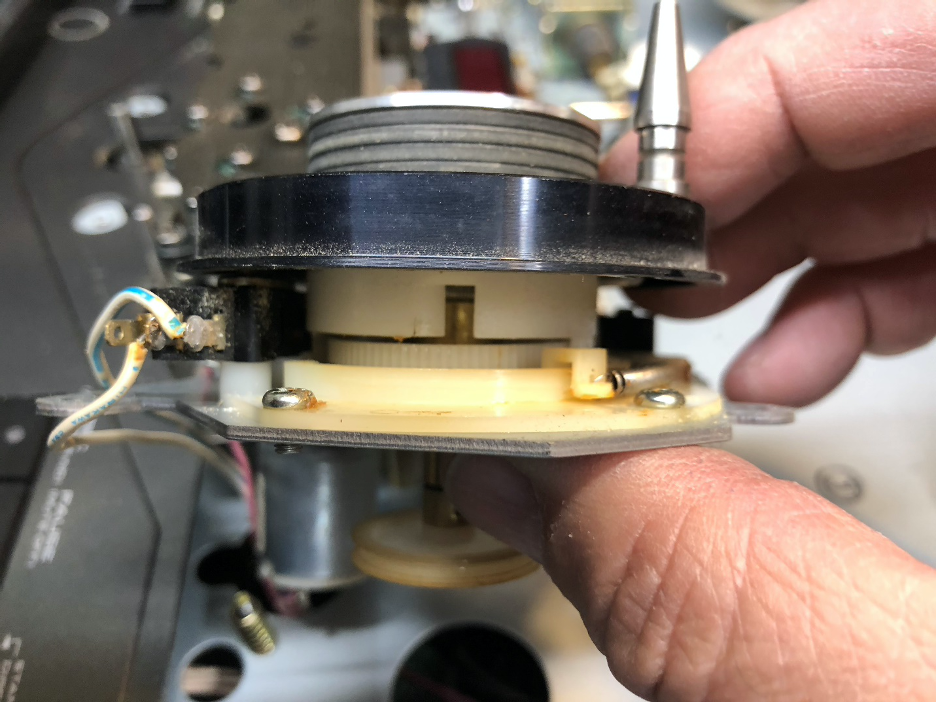 The die-hards will say that the proper way to lubricate the tension levers would be to completely disassemble them, and I agree, however since parts for the GX747 are very hard to come by, and since a lot of the plastic parts can get a bit brittle due to age,  do the disassembly if you wish, but at your own risk. Break a part of the tension lever assembly, and you’ll be out of a working GX747. I’ve found that the lubrication method works great, and I have yet to see a deck come back with the same problem.

Start putting the tape tension lever back in place. The hardest part is getting the C shaped washer in place under the tension lever metal, while putting the screw through the metal into that threaded standoff. Here’s the least frustrating way to do it: 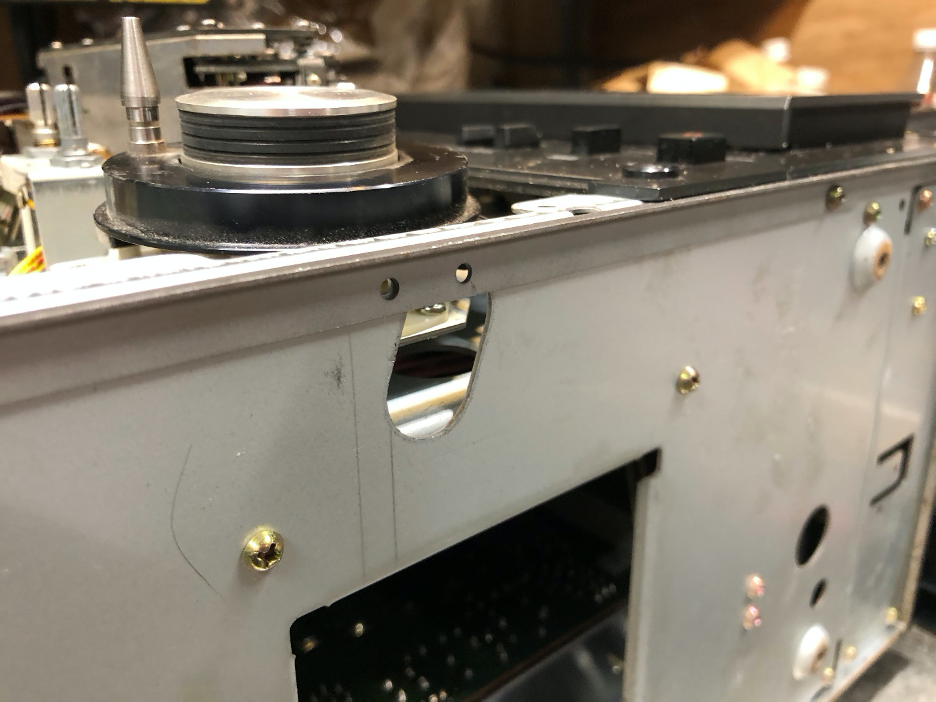 Once you’ve confirmed the proper operation,  reassemble the deck, and enjoy!